skip to main | skip to sidebar 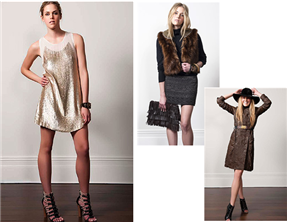 Gryphon is known for its beautifully designed trench coats and biker jackets with stunning beaded miniskirts that are simple in design, practical and glamour. When it comes to trenches with a twist, Gryphon’s is the one to know. In just two years, the Gryphon designer's chic yet affordable spin on the wardrobe classic has taken the fashion industry by storm. With celebrity fans such as Kate Hudson and Reese Witherspoon swoon over Gryphon’s timeless double- breasted trenches and gold-studded, military-inspired jackets, and now the former Vogue fashion writer is taking her talent inside. Gryphon’s designer, Aimee Cho, who was Fashion Writer for Vogue Magazine, where she was working for 6 years. While Cho was still at Vogue, a brainstorming meeting about the essential building blocks of a modern wardrobe prompted an idea for a business.
The trench coat is a fashion history icon. The trench gained prominence in the visual language of popular culture – evolving from its initial purpose as a soldier’s protective cloak to become the uniform of film noir anti-heroes and ultimately, a staple of a man or woman’s modern wardrobe. The trench coat was developed as an alternative to the heavy serge greatcoats worn by British and French soldiers in the First World War. Invention of the trench coat is claimed by both Burberry and Aquascutum, with Aquascutum's claim dating back to the 1850s. Thomas Burberry, the inventor of gabardine fabric, submitted a design for an army officer's raincoat to the United Kingdom War Office in 1901. A reinterpretation of the trench is the foundation upon which Gryphon was built. They took the iconic coat and played with fit and form, but always with an eye to practicality. The Gryphon trench is a fashion forward, year round, rain or shine item. www.stylert.com
Eingestellt von sana um 01:51